Rehearsals, shows in production and other interesting bits from Metropolis 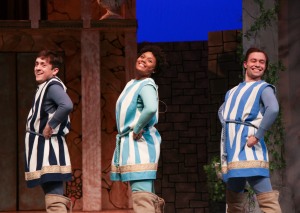 Acting is a strange balancing act. As actors, we’re under constant pressure to remember that, though we’re the only ones on stage, we are never the most important person involved in a production. We are merely the messengers of someone else’s story, and we’re always caught trying to balance the necessary act of telling that story honestly as it was meant to be told with the personally fulfilling act of making the characters and the story uniquely ours. In other words, be original, but not too original. It’s a challenge, and it changes from show to show. Depending on your approach to acting, getting cast in a Samuel Beckett play that allows for little to no variation from any former productions could be torture or a great relief.

On our first day of rehearsal, I believe it was our director who pointed out this
fascinating note from the authors written in the front of all of our scripts:

“This is a scenario for vaudevillians. There are many details omitted from the script. They are part of any comedian’s bag of tricks: the double take, the mad walk, the sighs, the smirks, the stammerings. All these and more are intended to be supplied by the actor.”

What a fascinating author’s note to receive. In saying, “We know we left stuff out, that’s for you to find on your own”, they pushed a door wide open for us, and now the pressure was on us to go running through it. So we became vaudevillians, and we ran.

This cast and crew may just be the most creative group of people I’ve ever had the pleasure of working with. From day one we’ve taken that challenge from the writers head-on. In coming to see “A Funny Thing…”, you’re going to see so many original ideas play out in gloriously hilarious fashion – the double takes, sighs, stammerings, etc. that were mentioned in that author’s note, along with so much more. But for every one gag performed, there were at least five others that were experimented with in rehearsals that you will never see. And I believe that’s exactly why a show like this holds up after over 50 years – with so many blank spaces left in between the lines of this script, no two productions you see will ever be the same. Different jokes will be highlighted, different gags will be used, entire characterizations can vary and rather than subverting the entire show, you just end up with a different kind of humor, a different thing to laugh at.

Stage performers are often considered “players”, and that title has never rung more true than in these last few months. We’ve played and played and played. Just know that every moment that you laugh at is a moment where we had multiple possibilities, and we had to choose just one. Same for any moments where you don’t laugh, or you feel a joke is missed. It’s that kind of show. But I do believe we gave you more of the former than the latter, and we gave just as much to this show as it gave to us. The result is a show that still makes me laugh in the wings, even after having seen it so many times. Sometimes it’s because these incredible actors are just that funny, and sometimes it’s because this show and these jokes are just that good. 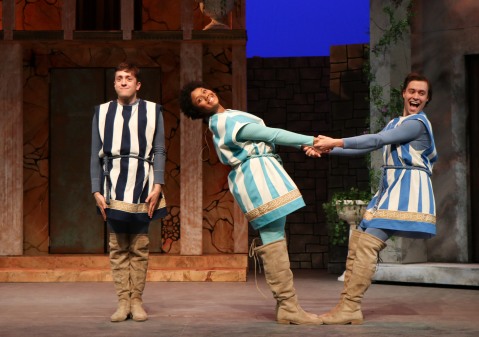 You are currently reading Forum’s Eric Deutz on the Time Tested Comedy at Metropolis Insider.